Number of Visitors
History of Bc square and Round dance festival
REGISTER NOW!!
Sign Our Guestbook! 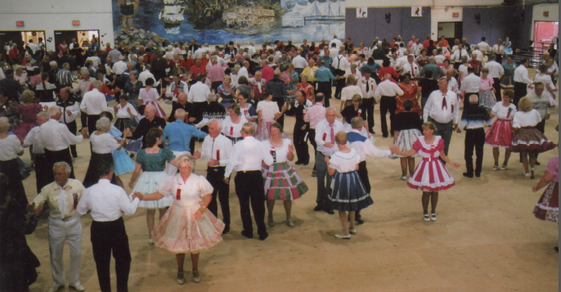 The heart of the Square Dance movement is friendship. This friendship starts at the local club and association level and is enhanced and nurtured by events of a larger scale. These events, known worldwide as Festivals, are essential to foster and maintain the Square Dance movement. The BC Square and Round Dance Federation is an avid proponent of Provincial Festivals.
There is something very special about a multi-day dance event promoting the various genres of Square Dancing in a spirit of fun, fitness and friendship. The traditional format for a full festival incorporates multiple levels of Square Dancing, multiple phases of Round Dancing, Clogging and Contra and may include such events as a Show Case of Rounds, Dance Clinics, Square Dance Workshops, Caller/Cuer training, seminars, a Fashion Show, and Opening and Closing Ceremonies. The host region for the subsequent Festival has often sent a delegation to participate in the Closing Ceremonies to invite everyone to attend the next provincial festival, if their planning is already well underway.
The first BC Square and Round Dance Festival was held in Vancouver in 1985. The original concept included as many levels and genres from the square dance activity as possible based on the number of dancers registered.  An odd numbered year was chosen so as not to conflict with the National Convention that was already being held every two years on the even numbered years. The 1985 Festival was used as a trial run in consideration of B.C. bidding for a National Convention, which went ahead at Canada Place in the year 2000.
Leaders were all those square dance callers, round dance cuers, contra and clogging prompters who registered for the Festival and were willing to call, cue, prompt, and/or conduct seminars at the Festival. This provided an opportunity for all leaders to gain visibility and recognition. The leaders volunteered their time and paid the same registration as all other dancers.
Future Festivals were to be held every two years, on odd numbered years, in a different Region each time. This would permit dancers to travel to the various Regions and have each Region assume the responsibility of hosting the Festival.
The Festival was financially underwritten by the Provincial Federation. This meant that each and every dancer in B.C. contributed to the financial viability of the Festival through their membership fees.  Surplus funds from the Festival, after expenses, were to be split 50/50 between the Region Association(s) hosting the Festival and The Federation. The Federation assumes full financial responsibility for the Festivals. If a Festival operates at a loss, the Federation assumes the liability.
The Festival has been a successful and profitable venture since its inception in 1985.  The Festival has been held throughout the Province, meeting one of the original goals of having it hosted by different Regions. The Festivals held in the 1980’s beginning with 1985 were in Vancouver, Victoria, and Kelowna. In the 90’s, the Festivals were held in Nanaimo, Chilliwack, Prince George, Duncan, and Salmon Arm. Starting with 2001, the rest of the Festivals held have been at Courtenay, Abbotsford, Powell River, Vernon, and Parksville.
Region 2 hosted BC Festivals in 1985, 1993, and 2005. Our sincere thanks to the folks who have gone before us leading these wonderful events. Many of the committee members from these previous festivals are still dancing and providing leadership within our wonderful activity.  They are lending their enthusiasm and expertise to help the current committee ensure BCFestival 2017 is also a success.